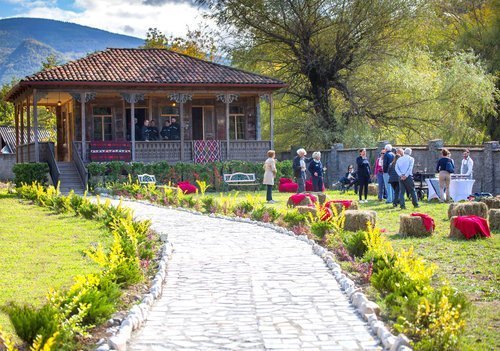 This famous vineyard is based high up in the hills of Racha, Western Georgia. Racha is an exceptional place in the history of georgian vini- and viti- culture. Over the centuries, the Rachan people worked day after day to perfect their grape varieties as well as their methods of vine cultivation and winemaking. It is believed that the ancestor of Khvanchkara wine, Kolkhuri Tkbili, was well-known in ancient Greek times. The renaissance of Rachan winemaking is mainly due to two Rachan noblemen: Konstantine and Kaikhosro Kipiani. In the 1870s, the two gathered together all the ancient and local traditions of winemaking and vine cultivation, and started to make the legendary Kipiani wine, which was made from Aleksandrouli grapes. Their wine soon gained a reputation not only in western Georgia, but also throughout the Russian empire. Experts described the wine as velvety and tender. Their wine entered the international market in 1897 and won the Grand Prix at the international wine exhibition in Ostend, Belgium, in 1907. Kipiani wine was renamed Khvanchkara by the newly established Soviet power with the purpose of hiding the achievements and success of the aristocratic Kipiani family.

In 2001, a new winery opened on the grounds of the original Kipiani wine factory, but until 2015, the volume of production was tiny. A few yeas later, the wine company Royal Khvanchkara was founded. Its main challenge was to revive the rich culture of Rachan winemaking and preserve the knowledge and experience that had been gained over the years. The company now honourably continues that unique tradition. The vineyards are planted on carefully selected and tended areas. Sophisticated technology and professionalism continue the tradition of Royal Khvanchkara’s soft and velvety wine. The vineyards of Royal Khvanchkara cover 18 hectares in five Rachan villages: Sadmelis Chala, Qoveli, Tola, Zhoshkha and Chkvishi. The location of the vineyards is ideal for the ancient local grape varieties – Lleksandrouli, Mujuretuli, Usakhelauri and Tsolikouri. The vines grown on the right bank of the Rioni river and on the south-west slopes, at 780-800 meters above sea level, give the highest quality harvest. The perfect combination of climate and soil gives the grapes their exceptional properties. Mild temperatures, humidity, crystal clear air and many days of sun further define the unique taste of Royal Khvanchkara